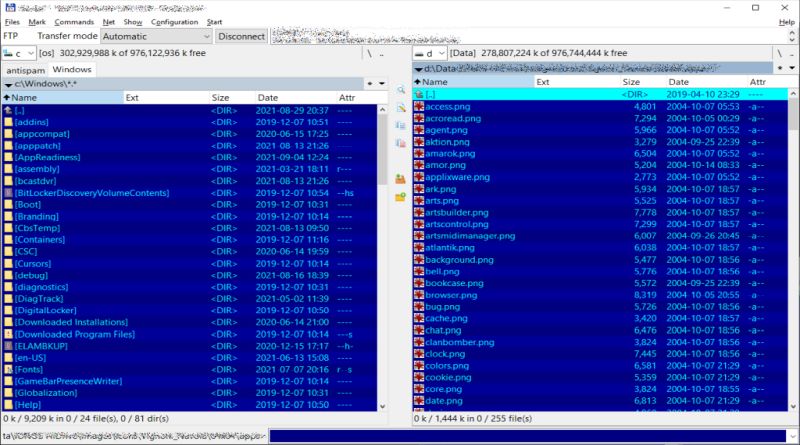 Total Commander has proven its quality for many years and is one of the best two-panel file explorer around. 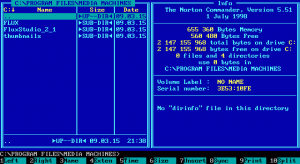 Maybe some of you remember the famous “Norton Commander”, a text-based two-panel file commander used on MS-DOS (see image on the left, taken from Wikipedia). It  was first released in 1986. Its two-panel user interface turned out to be extremely effective when working with files. 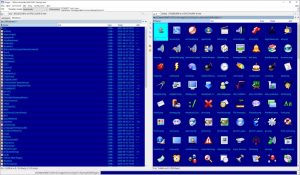 Total Commander picked up that two-panel concept when it was first released in 1993 as a graphical program for Windows.

Some thought it would not be very successful since with Windows, file operations wouldn’t be needed that much anymore. Well, that was far from true. Since I work with computers, a two-panel file explorer is my most important tool to use.

Total Commander combines the effectiveness of two panels and combines it with Windows based extensive configuration options. You can set up key and mouse button mappings, event behavior and all kind of user interface settings like the colors. Mine looks like the screenshot on the right. And yes, the blueish colors is surely an homage to NC. You can also quickly switch between display types. Instead of just the file list, you can show thumbnails of an image folder like shown on the screenshot.

Total Commander also allows to connect to external resources via FTP or SFTP. That makes it very easy to update files on a remote server as well. You can setup function keys to launch your favorite editor with the file currently selected. I actually have set up two of those, one for a quick edit with Notepad++ and another launching Visual Studio Code.

TC also offers folder synchronization. You can start with analyzing the differences between two folders and then decide what you want to sync.

Oh, and did I mention that you can even add more tabs to each panel? Each tab can show a different directory and you can switch between tabs in a panel by pressing Ctrl + Tab .

At the bottom, TC shows a command line textbox. When you start typing while the Total Commander is in focus, it automatically enters the text right there. Enter will launch the command. I use it a lot to start a command prompt window in a certain directory or to use Winmerge to compare to files. With one key combination you enter the currently selected file including its complete path into that box.

Total Commander is available as Shareware. You can download it for free and as long as you use it as shareware you are asked to hit 1, 2 or 3 (random) when it starts.

Since Total Commander started its website in 1996, it had over 83 million hits. I think that speaks for itself.