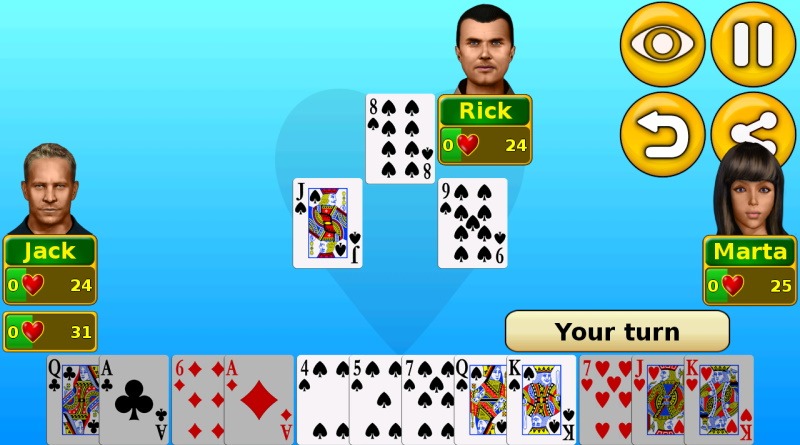 An excellent Hearts game app for online and offline plays on Android and iOS mobile devices.

Among a multitude of great choices, Hearts developed by Karman Games stands out for its user-friendly design and rich features. You can play against strong computer players as well as online human players with either rated or friendly games.

To play against a computer engine, you can start a new game or continue with the last turn of the game you played, and you have a choice of reviewing past tricks, reversing the tricks with unlimited undos, or sharing your hand of the game with your friends.

To play against humans online, you have a choice of playing friendly games or more challenging rated games, in which you will get 1 point for finishing better than an equally-rated opponent, and up to 10 for a higher-rated one. The gameplay and scoring methods are described in the app.

The settings in the app go into every detail, such as rules settings, online play settings, visuals of the game, sounds and vibration as well as game speed. You can also determine the strengths of your opponents you want to challenge.

Rules settings are great for different gameplay, including the way of passing cards, if the Jack of Diamonds gets -10 scores, the Queen of Spades breaks Hearts and how Shoot the Moon scores.

This app also offers you the statistics of the games you played, analyzing the number of games started, finished and hands played, together with the places and scores achieved for each player. The interesting statistics per hand including points, Shoot the Moon and the Queen of Spades ever taken are also recorded.

Unfortunately this game app is supported by ads and it costs you some monies if you want to remove ads from the app.